Bitcoin is often referred to as “digital gold”. Both assets have similarities, but there are differences. Friend or foe? A comparison between gold and Bitcoin. This article is part of a cooperation and originally published on 10×10.ch Friend or foe? This is a question Bitcoiners and Goldbugs continuously ask themselves when they encounter someone from the opposite camp. The answer? Nobody really knows. Despite similar attitudes and views on today’s monetary system, both camps dish dirt on one another through streams of accusations. According the Goldbugs, bitcoin is a huge waste of resources, thus is a threat  the environment. They further claim that bitcoin is a tool for criminals and is no different than monopoly money.  Conversely, bitcoin enthusiasts counter by claiming that Gold is a resource brought to market via appalling labor conditions, starvation and sometimes even death. Gold is a relic from the past, say the Bitcoiners. Do Bitcoiners and Goldbugs have anything in common? The fact that Bitcoiners and Goldbugs continuously get into each others faces is a surprise, as both bitcoin and gold have one thing in common: Their value cannot be inflated by any central bank, since – unlike fiat money – they do not have a direct counter-party risk and thus do not represent an obligation of another person. Both are therefore regarded by their supporters as a protection against negative interest rates, over-indebtedness and the demonetarization of fiat money. Both are liquid assets outside the fiat money system. In short, the narratives that feed them could not be more similar. Despite these similarities in nature, there has been an extremely low, in some cases even negative correlation between gold and bitcoin in recent years. 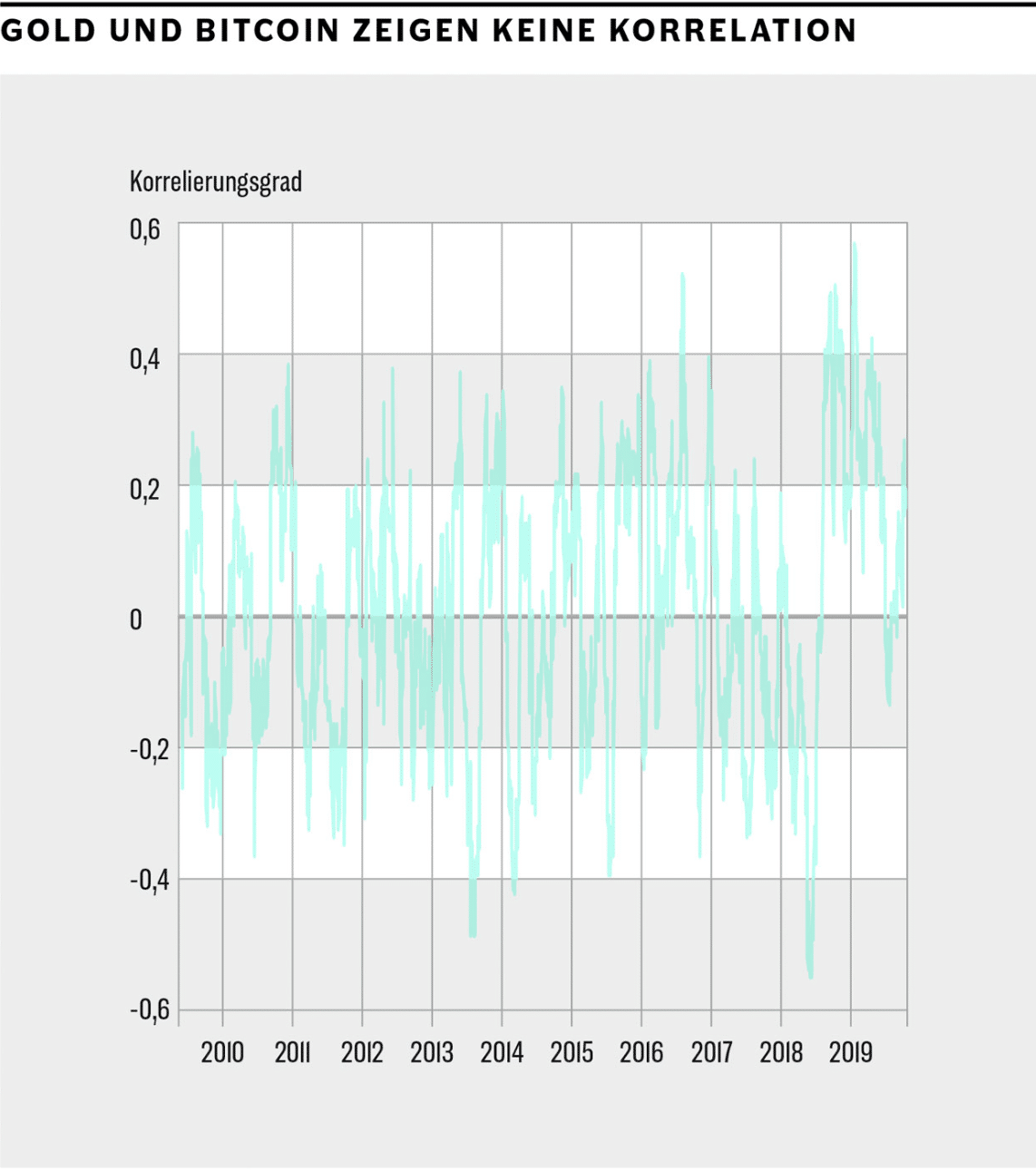 (Source:Amun Research) Investors will benefit from this fact – with a clever combination of the two they can diversify their portfolio and reduce price fluctuations (especially due to Bitcoin). Safe haven Gold has been considered a safe haven for decades – the same cannot (yet) be said of bitcoin. Although it has now made it onto the international financial stage, its actual relevance as a marco-economic refuge asset is still questionable. While gold can look back on a long history, bitcoin is only just over ten years old. There have been repeated market riots – for example in Cyprus or Greece – in which bitcoin was actually bought by parts of the starving population and the price has risen as a result. Nevertheless, the macroeconomic and geopolitical importance of bitcoin is still far behind that of gold. (Reading tip & background: What you need to know about the crypto world) However, according to the arguments of prominent bitcoin representatives, the cryptoasset is predestined for relevance and thus also value gain. Thus, bitcoin has already proven to be an anti-fragile phenomenon several times, both in technical and monetary terms. The Silk Road debacle, the Segwit2x dispute and price crashes of over 80 percent – bitcoin has survived them all. Chances of survival Bitcoin? Bitcoiner’s are convinced that the Lindy effect also applies to bitcoin. This phenomenon, recognized by Nassim Nicholas Taleb, states that the future life expectancy of non-perishable items is proportional to their age. This means that each additional survival period results in a longer remaining life expectancy. So, the longer bitcoin exists in the present, the longer it will exist in the future. Enthusiasts are convinced that bitcoin’s unique monetary properties will enable it to establish itself as an internationally significant non-state value storage medium. Monetization of bitcoin and its establishment as a safe haven would also be at the expense of gold, they argue. Precisely because bitcoin does not yet have a long history to validate itself, it can still earn it – as a new digital value storage medium it has sufficient room to grow further. Digital is the decisive keyword for Bitcoiner’s. The argument is simple: In an increasingly digital world, bitcoin is better positioned as digital gold than physical gold. 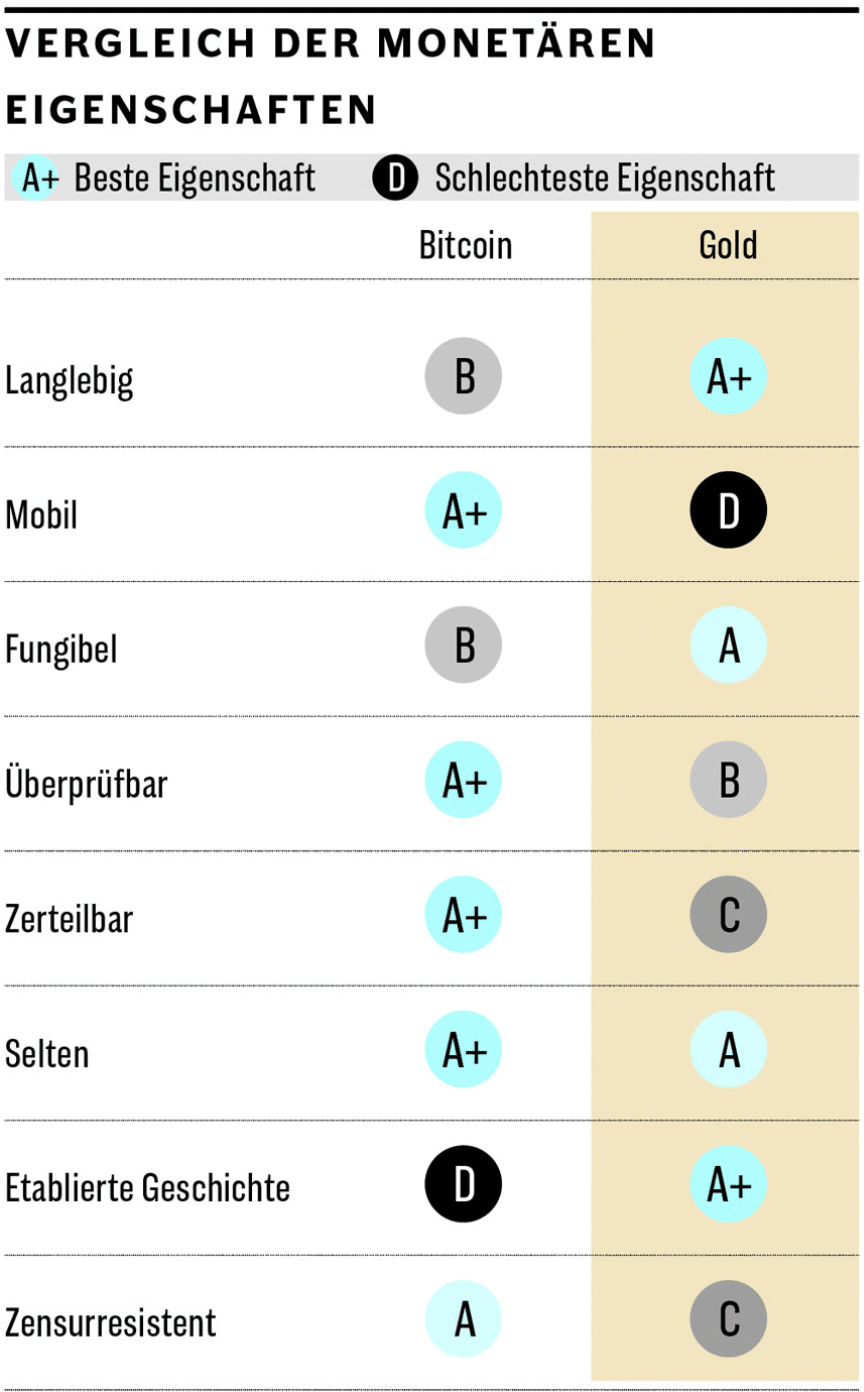 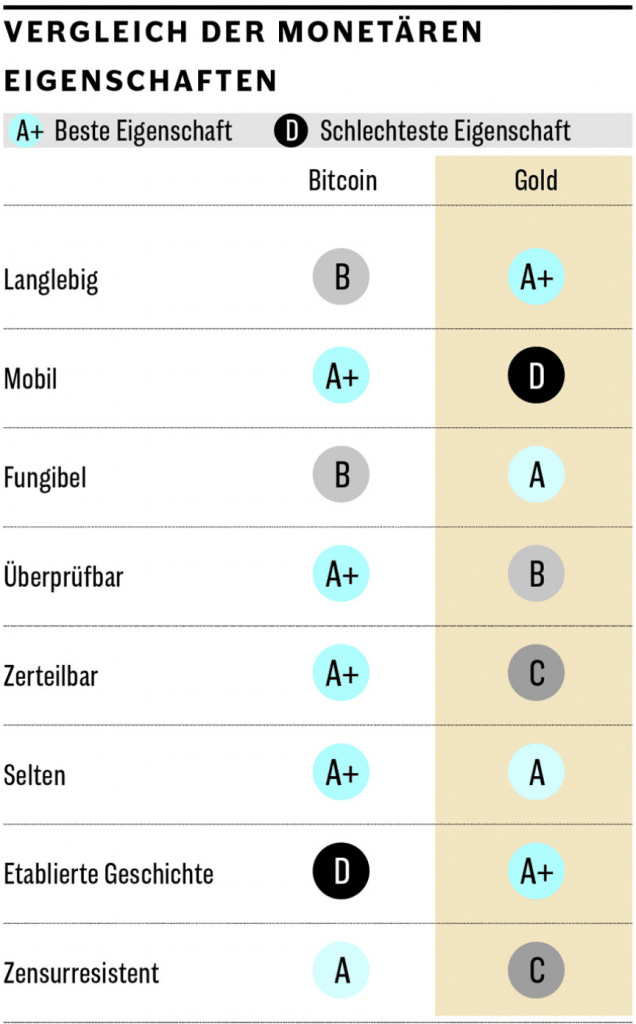 (Source: Medium article by  Vijay Boyapati) Discontinued Gold model? The digital age requires real internet money – and bitcoin is made for it. Via the Lightning Network, an additional protocol based on the BitcoinBasechain, Bitcoin sends centimes around the world in seconds. But transactions worth over a billion dollars are also possible – for a fee of just over 80 dollars. Even from a purely practical point of view, Bitcoin is superior to gold in many aspects. The crypto-asset is uniform, divisible free of charge, easily recognizable, invariably scarce and easy to transport. In addition, bitcoin is easier to audit than gold. While bitcoin merely requires a so-called “full node” to check the integrity of the Bitcoin network, the inspection of gold bars with an X-ray fluorescence spectrometer is a costly process. Missing answers So is “digital gold” really the better version of physical gold? Although there are claims of a “Bitcoin Advantage”, a final verdict is risky. Unlike gold, bitcoin is not a natural resource, but an abstraction that could not be used without blockchain and the maintenance of a decentralized database. As an abstraction, this blockchain exists only as long as it is maintained by the bitcoin miners. So the question that arises at the end of the day Are the economic incentives strong enough to maintain the bitcoin network and thus the decentralized database on which bitcoin “exists” in the long run? We don’t know the answer yet – and that’s why bitcoin enthusiasts should not rush to write off real gold too soon. * Originally published in German at CVJ.ch
Tags: Bitcoin, Crypto, Gold

Crypto-adaptation in Africa is progressing