At the heart of any conversation about bitcoin is a much broader discussion – what is money? To answer that question, we have to talk about central banks. There is also a question of whether we are facing the digital currency war. Money as a means to create an empire has existed almost as long as history itself. This is not a treatise on the meaning of money. For that we would probably need Joe Rogan, a joint and a bottle of whisky. I’m rambling already. Julius Caesar is credited with the innovative idea of using coins as more than just currency. By minting his face on coins, Julius Caesar created one of the most effective instruments of government control. Since then, issuing money has been the privilege of the state. Central banks evolved from a world of physical cash. In the days of Caesar, we needed an institution that stored coins and managed payments and balances between parts of the empire. Today, central banks manage these payments and thus entire economies. The central banks still manage coins, but now they move our zeros and ones into a central bank database instead of moving coins into the Royal Treasury and or the Empire. Banking on the Blockchain With the advent of cryptocurrencies and later the application of  blockchain technology and beyond, central banks are now intrigued by the possibility of using blockchain technology to add a new set of instruments to their arsenal of policy instruments. It started with Venezuela, which attempted an Initial Country Offering in 2017 by tokenizing its oil reserves. This occurred despite extensive sanctions that limited the country’s ability to access global financial markets. Such actions continued in the Marshall Islands, which for very different reasons, have difficulties accessing capital markets. Due to their tiny size and the remoteness of the island state, it is difficult to obtain financing. They have explored the possibility of raising capital through a token called SOV. Here is a comparison between the tokens of both countries: 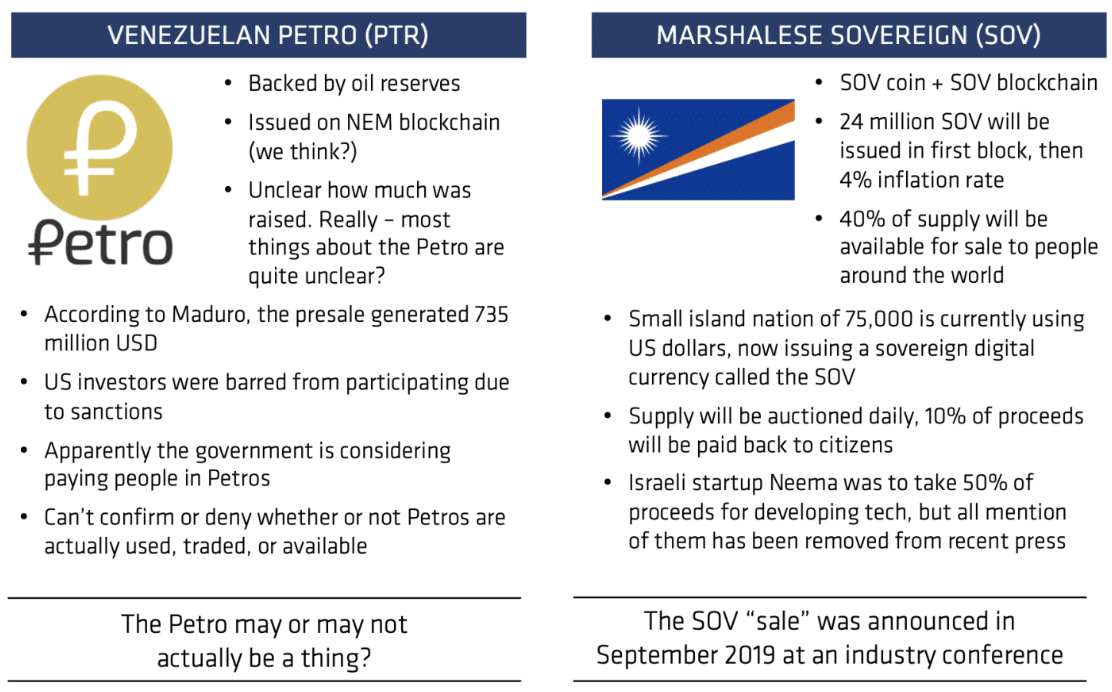 According to Facebook’s announcement of Libra, every central bank is suddenly incredibly curious about crypto. According to a recent report by the Bank for International Settlements (BIS), 80% of central banks are currently investigating the issuance of a central bank issued digital currency (CBDC). Stablecoins send a wake-up call There is another practical statistic that we should consider. The rapid growth and spread of stablecoins. Although still small in global terms, it has opened the eyes of many central banks and commercial banks that rely on them for liquidity. Just look at the continued dominance of Tether, a stablecoin linked to the USD. Tether currently has a volume of more than $4 billion and generates at least $100 million in fees per year. Tether is probably the most important asset with this function in the digital currency ecosystem, as it provides a payment mechanism inherent to distributed ledger technology. 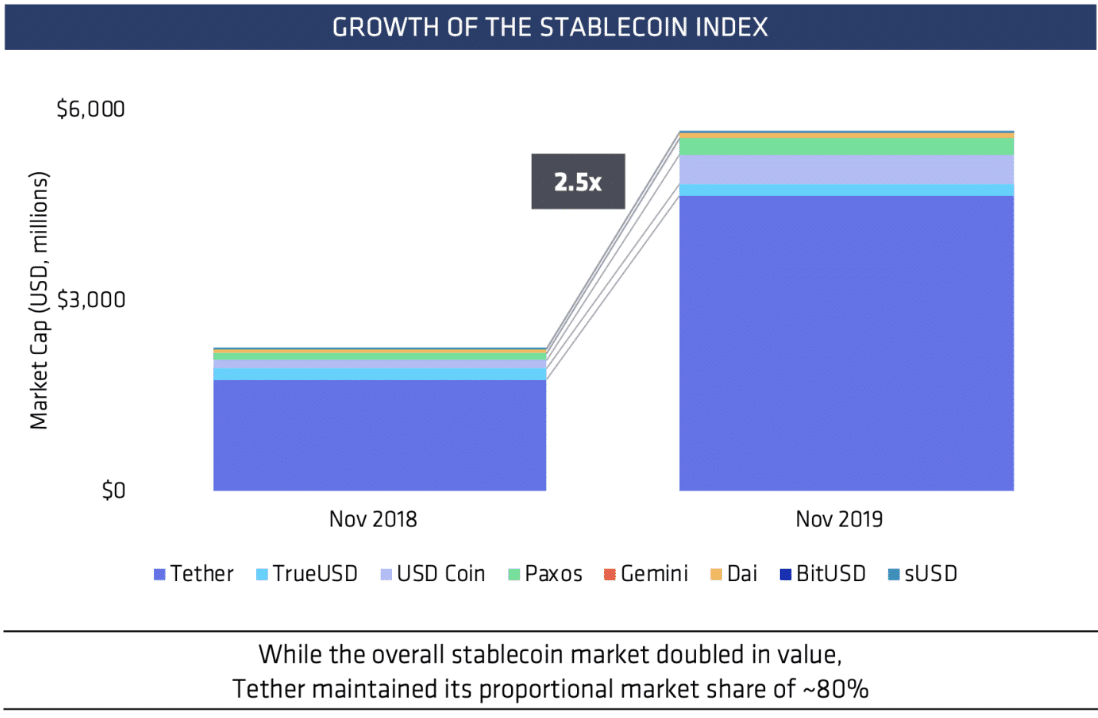 “China is moving quickly to introduce a similar idea and should be ready in a few months. Libra will be supported primarily by dollars, and I believe it will extend America’s financial leadership, our democratic values and control around the world.” – Mark Zuckerberg

Central bank digital currencies will herald a new era and a new aspect to currency wars. It will be very interesting to see which protocols, networks and product and service providers will ultimately be the providers of choice for governments. We like to believe that start-ups are made of magic and stardust, but we forget that Silicon Valley owes much of its heritage to the needs of the military-industrial complex. And we see a growing number of companies in the Valley focused on solving problems not only for businesses and consumers, but also for the largest and most complex institutions in the world – our governments. After all, Amazon, the trillion-dollar dot-com poster child, is well on its way to becoming one of the largest US defense companies. Does the future lie with Bitcoin? At the end,  this tweet to summarizes my thoughts in a nutshell. If every central bank, every company and every power-hungry entity decides to issue its own digital currency, what would be the neutral choice for international trade? Does the medium really change the message? And above all: Where will the market activities flow to? 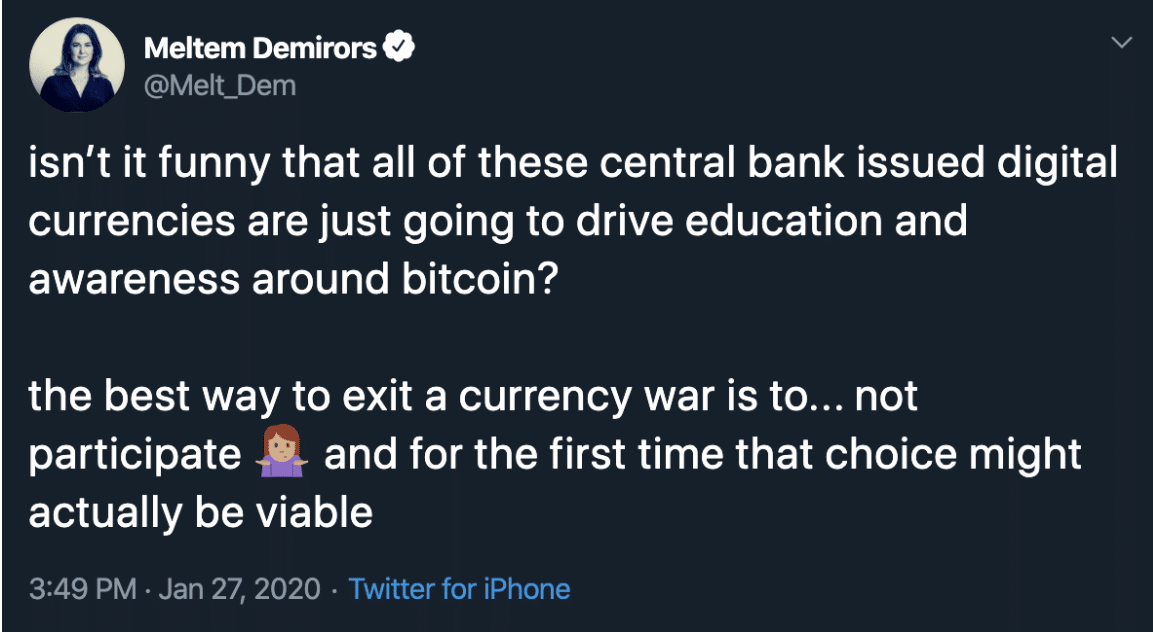 I’m about two sentences away from mentioning #BitcoinFixesThis here, so let me spare us all the rocket emojis. The current state of digital central bank currencies has many people seeing why Bitcoin is so powerful. It doesn’t belong to any state, government or country. And that is something we can all look forward to. * Originally published in German at CVJ.ch
Tags: Banking, CBDC, Crypto

New financing method on the basis of Blockchain

Money: How its past predicts its future