crypto-valley-journal 2019-11-03
0 Comments
The trading in traditional assets such as currencies, shares or commodities began over a century ago, with the most important trading platform for U.S. shares, the New York Stock Exchange, established in 1817.  Now a new form of asset has entered the roster and as a result, new exchanges are on the rise.     Evolution of the crypto exchanges  As noted above, traditional marketplaces, exchanges and assets have been around for quite some time, however, the crypto trading is still very much in its infancy. The first trading place for bitcoin was seemingly the Mt. Gox exchange,  that opened operations in  2010. However,  after experiencing a hack which resulted in vast amounts of assets  being stolen from clients, Mt.Gox was forced to close down and filed for bankruptcy in 2014.   In 2011 and 2012, cryptocurrency exchange providers began to enter the market, yet in contrast to Mt. Gox, many remain active to the present. Today,  the largest exchanges by trading volume include Bitfinex, Bitstamp, Kraken and Coinbase. In 2013 further exchanges targeting the Asian region followed suit, such as OKCoin, Huobi and Binance. Binance, which was only established in 2017, was capitalized with a token (ICO) and is currently one of the largest crypto exchanges in terms of volume and range of traded coins. It is no secret that stock exchanges currently represent the most lucrative companies in the crypto sector. According to calculations by the block, Binance alone was able to post a profit of almost $450 million for 2018.   In general, these new stock markets vary in their offerings, with some focusing on the tradability of as many currency pairs as possible, while others offer instruments with leverage effects from the derivatives market.  Differences from traditional exchanges  One of the main differences between crypto exchanges and traditional exchanges is the access to them. While access to a stock exchange requires a middleman in the form of a bank or broker, crypto trading is done directly from the investor through the exchange. In addition to operating the trading platform, the crypto exchange also takes care of the safekeeping of the securities. It manages the accounts and the wallets for the customer and keeps the customer’s holdings and crypto assets in safe custody. However, this entails the risk that these customer assets are at risk in the event of a hack. However, it is possible to transfer the crypto-assets into a separate Wallet after the purchase has been made, which can be held off the Exchange. If the intention is to hold the crypto-assets for a longer period of time, this method is preferable to holding them on the stock exchange for security reasons.   Another difference is the trading hours. While the opening hours of traditional exchanges are usually based on office hours, crypto is traded 24/7.  Currency pairs and order types  Most exchanges offer a fiat currency pair for the most important crypto currencies; this means that the investor could trade Bitcoin directly against USD or EUR. Currency pairs with stablecoins are a frequently used alternative. Here Bitcoin could be traded against a USD stable coin. 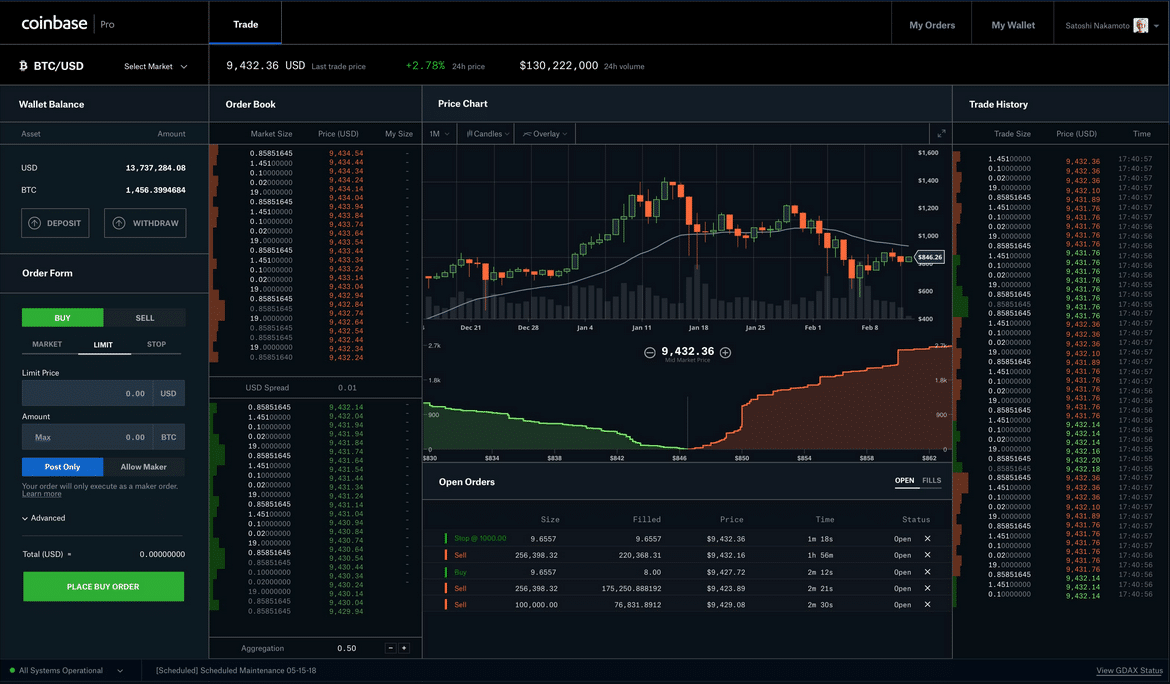 Trading interface as seen on Coinbase Pro The trading method and the types of orders do not differ significantly from a traditional stock exchange. There is an order book with market depth. Orders can be limited or best placed and different stop loss variants are usually also available.  Decentralized exchanges   The vast majority of crypto stock exchanges currently provide centralized exchanges. The overwhelming majority of trading volumes are also currently generated on them. As with traditional exchanges, they are managed by a company. Trading and custody take place on their closed server system. Since the custody of crypto-assets in particular involves risks, the idea of decentralized exchanges is an interesting in principle. On decentralized exchanges, the crypto-assets are held directly by the investor in their own wallet and are only transferred when a trade is concluded with another market participant. The investor therefore remains the owner of their assets. The advantages of security are currently still clouded by lethargy. Due to the complexity of the configuration of a decentralized trading place, common exchange features such as marketmaking or stop loss orders are more difficult to implement.  The field of decentralized exchanges is developing rapidly. Hybrid solutions are also being sought in some cases. In addition to existing decentralised exchanges such as IDEX, OpenLedger DEX, Forkdelta to name but a few, Binance has recently started to use Binance DEX.  An overview of the currently most common crypto exchanges can be found here.  * Originally published in German at CVJ.ch
Tags: Essentials, Investment, Markets, Trading

The CVJ editorial team consists of crypto experts, active in different areas around the blockchain technology. In cooperation with selected authors, CVJ.CH provides a high-quality resource around the distributed ledger technology. Independent and up-to-date reporting according to journalistic standards as well as educational content around the topic blockchain, rounds off the offer.